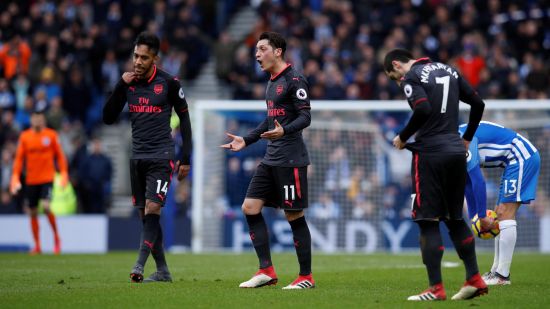 🌐 This was Arsenal’s first defeat in 35 Premier League games against a newly promoted side, since losing 2-1 at QPR in March 2012.

🌐 Arsenal haven’t kept a clean sheet in their last 11 Premier League games, their joint-longest run in the competition.

🌐 Arsenal have just 13 points from their 15 away Premier League games this season – their worst return in the top flight since 1989-90.

“We have to get over this period, recover mentally and physically and we have another game on Thursday against AC Milan and then on Sunday.

“It’s the first time its happened in my whole career and it’s not easy. I have enough experience and desire to turn things around.

“When the team struggles for confidence it’s even more difficult.”

“We are in good form. My biggest disappointment of the game was conceding just before half time because at any level that gives the opponent a lift going into the second half.

“The fact we got the two goals early gave us that buffer that we could hang onto but over the 90 minutes I felt we were very worthy winners.

“Our intent at the beginning of the game was very good. No complaints with that first half except the goal we conceded before half time. And then we showed the other side of our game – the ugly side – and you need that.”