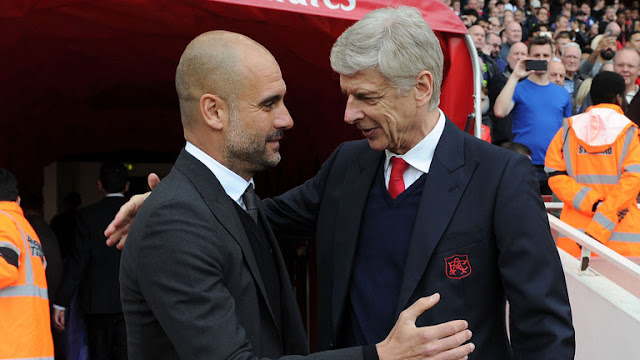 Manchester City won the Carabao Cup with a 3-0 win over the Gunners last weekend and it sure feels good as City Boss Pep Guardiola admits, with considerations about the present situation at Arsenal.
Since the defeat, Arsenal Boss Arsene Wenger’s position has been under huge scrutiny and the city boss admits he will someday be in such a situation in the future.

“I always support my colleagues because we feel the same when we win, when we lose”. Pep told Skysports.
“We accept the opinions of the fans and the people and you feel alone. Believe me, you feel alone because there’s a lot of pressure on your shoulders.
“I understand completely. I’d like to tell him that I am close, I am on the same side as him. That’s why I don’t understand when other managers criticise the other managers.
“It’s tough to send a message to the other ones from here because everyone understands how you feel when you lose.
“What happened can happen to me in the future. We won, I’m good. Arsene Wenger didn’t win so he’s not good.”
Arsenal will host City again on Thusday, and Arsene Wenger will have an opportunity to carry out some kind of revenge on City, while City Will have the opportunity to increase their lead to 16 points.