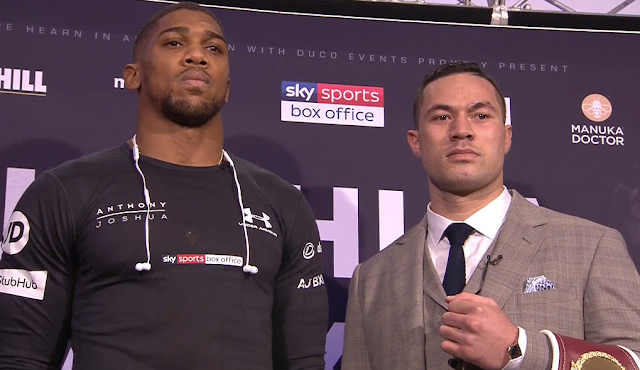 JOSHUA WANTS KO Win, Apologies For Walking Out On New Zealand Press
“Parker has two arms, to be simple, but he is quick and can take a punch, that’s what I’ve heard.
“Your weight depends on who you fight, if they’re taller or short and stocky. I don’t know what my weight will be but I feel great.
“One fight at a time, all this talk about Wilder. I’m looking at Parker, he’s a champion for a reason. If I’m victorious, I can look at future plans.
“I don’t want to lose, people thought I walked out on the New Zealand press but that wasn’t the case, I had to make a move and I was willing to return.
“I’m preparing for a 12-round fight, which isn’t a problem to go the distance. I believe I will knock Parker out for sure.”

The Face OFf
“It was because I was there from 10.30am until 5pm but hadn’t eaten and had to go and do that and then come back to the gym for 6.
“It doesn’t matter where they came from, if they had they been from Nigeria, New Zealand, anywhere.
“I just had to go, and told my team if he wants to wait I will come back and do it, I will.
“But what I do know is, if I don’t do my stuff properly, no-one would want to talk to me anyway!”
IBF, IBO, WBA Heavyweight champion Anthony Joshua Calm And Ready To learn From Parker Fight

“Thank you to everyone for coming out, I much appreciate it.
“Every fight has been a learning fight and every camp a learning cap. I learnt from the Klitshcko fight I shouldn’t use camp to get fit. I took everything I didn’t know then into this camp. I’ve been working solely on my technique and ability.
“Takam was game, he was a lot shorter, he was in great shape. I wanted to control him. I knew there would be a big 2018 on the horizon.
“Every fight is a blessing and every one will have reason in the long run. Parker is a champ and has done well, he will add something to my life journey. It’ll be over Sunday and i will look back and learn from it and move forward.”
Rob McCracken : Wladimir Klitschko, the toughest test, Joseph Parker second best

“Being relaxed and comfortable preparing for fights like this doesn’t do anything for what happens when you are in there facing Joshua.
“You won’t know what’s happening when you get hit by Anthony Joshua.
“Joshua sees it as another rung on the ladder to become the undisputed heavyweight world champion.
“I do think Klitschko is his toughest test but this is his next toughest…”
WBO Champion Joseph Parker Speaks

“It’s great to be here, we’ve had a great build-up and a great camp. I can’t wait to put on a great display on March 31.
“I’m confident, sharp and my movement is better than ever. I’m taking those belts back to New Zealand.
“Joshua is a great champion and we respect him and what he’s achieved. We love challenges. It’s whoever is going to put on the best display on fight night.
“It’s my time, I’m young, sharp and am determined to win. I’m here to be part of history, doing it for my team, family and country.
“I’m going to beat AJ, I haven’t decided how I will win. These belts are mine.”
Parker’s Trainer And Nutritionist Kevin Barry Is Confident

“But this has been the most enjoyable time we have spent together for the last eight years.
“It’s the right time for everything to click. As his trainer, I couldn’t be more comfortable or confident of how well this has gone.
“I think he has the best skill, the fastest hands of all the heavyweights and I will see if I have been dreaming or am proved right on Saturday night.”
Parker’s promoter David Higgins In Serious Mood

“I would like to thank AJ for being punctual, Eddie is the second best promoter in the world, I’m going to say very little today.
“I challenge Eddie Hearn to let AJ to speak for himself. If Eddie comes to bait me, I will get off the stage and ask him to do the same.
“If you read Joshua’s comments, they speak for themselves.”
Anthony Joshua’s Promoter Eddie Hearn Kicks Off

“Welcome everyone, it’s incredible scenes… we were here 11 months ago for the Klitschko fight.
“We are very proud to be here just a couple of days away from an incredible event at The Principality where history will be made.
“It doesn’t get any bigger than this and sometimes we have to pinch ourselves to see where we are at in British boxing.”
ARRIVALS