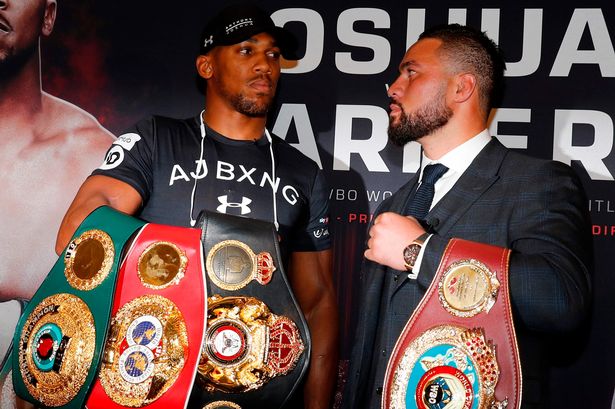 IBF, IBO, WBA Heavyweight champion Anthony Joshua has never fought in the America and this has been seen as an hindrance to the Brit, as the America has always been seen as the biggest place in Boxing.
Anthony Joshua (20-0, 20 KOs)  will be facing WBO Heavyweight Champion Joseph Parker in a unification fight on the 31th of March at the Principality Stadium in Cardiff.

Many critics believe that if they Brit takes a  fight in the America he will definite rack up more numbers than he is having in UK but his promoter Eddie Hearn in an exclusive interview with Skysports said he is breaking records in Europe and he is happy fighting there.
“As a heavyweight world champion and a major star in world boxing, should box over here at some stage,” Hearn told Sky Sports.
“There’s always been that myth really that in boxing you have to crack America, but I don’t see why.
“Look at what we are doing in the UK, look at the spectacles we are creating, [Joshua] is very happy boxing in the UK.
“I just think it’s a natural progression to fight in other countries and he wants to break down boundaries as well and part of that should be boxing in America, Africa, the Middle and Far East, but right now he is very comfortable doing what he’s doing.
“I am not sure if the US is imminent but I would expect him to box in America in the next 12 months.”