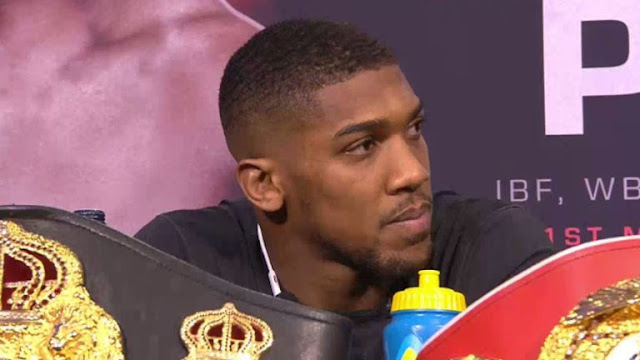 Anthony Joshua’s Promoter Eddie Hearn believes the 28 year old undefeated Unified champion is under pressure, as “he knows he has to perform” against a rather surprisingly “Relaxed” Undefeated WBO Heavyweight Champion Joseph Parker.

“Anthony has been edgy in the preparation,” Hearn told Sky Sports. “[Promoter David] Higgins, Parker and [trainer Kevin] Barry have tried to get under his skin. I wouldn’t say it’s worked.
“The pressure is on him and he knows he has to perform. It’s all about performance. He wants to show the world, and show his coach, how he’s improved since the Wladimir Klitschko fight.
“He is learning and improving.”

Hearn also observed the whole Parker team didn’t feel under pressure, as they have some assurance, they could win the fight,which some kind of way backs his belief.

“He’s looked the part in the entire build-up. He’s had his doors open to everyone,” Hearn said.
“He’s really relaxed, that’s the main thing I’ve noticed about Joseph Parker – not necessarily about his team.
“He has a belief that he can win the fight but also thinks that he isn’t expected to win the fight. So all the pressure is on Anthony.
“The pressure is on Anthony, and masses of it. Parker feels like he can relax, do his thing, then shock the world on Saturday”