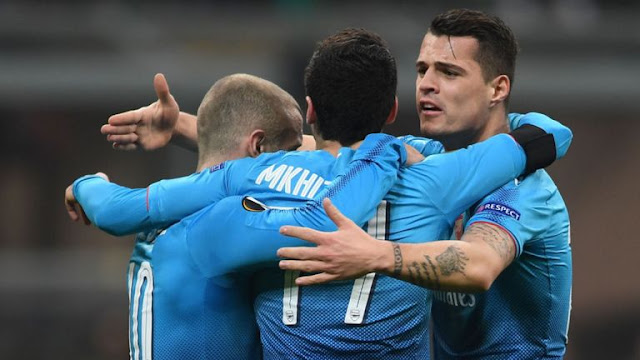 STAT  ATTACK
🌐 This was Arsenal’s first win in the opening leg of a last 16 European tie since February 2011 (2-1 v Barcelona in the Champions League).

🌐 The Gunners are the first side to beat AC Milan at the San Siro in the Europa League/UEFA Cup since February 2002 (0-1 v Roda JC) – the Italians had gone 10 games without losing between these defeats.

🌐 Arsenal’s victory ended a run of 13 games without defeat for AC Milan in all competitions, with their previous loss before this coming back in December 2017 (v Atalanta in Serie A).

🌐 Mesut Özil has been directly involved in 100 goals in 189 appearances in all competitions for Arsenal (37 goals and 63 assists).

🌐 With five goals and nine assists in all competitions this season, Özil (14) has had a hand in more goals than any other Arsenal player.

🌐 Since the start of the 2015/16 campaign, Henrikh Mkhitaryan has been directly involved in more goals than any other midfielder in the Europa League (15 – nine goals and six assists).

Seven of the Armenian’s last nine goals in all competitions have been scored in European fixtures (six in the Europa League and one in the Champions League).

Arsenal’s opener ended a run of 599 minutes without conceding a goal in all competitions for AC Milan.