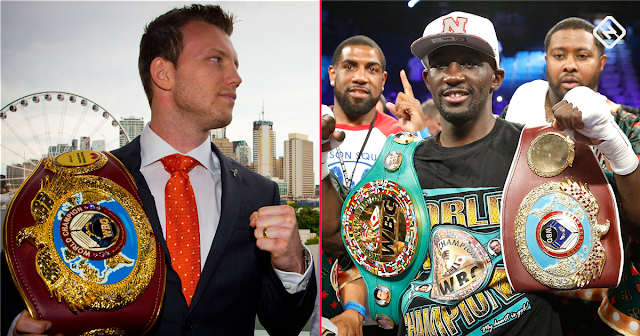 WBO welterweight champion Jeff Horn (18-0-1, 12 KOs) will defend his belt against mandatory challenger Terence Crawford (32-0, 23 KOs) on April 14th at the Mandalay Bay Events Center in Las Vegas, which as usual has brought for him support and advice from Hall of Famer Johnny Lewis, who is widely regarded as the greatest boxing trainer in the history of Australia.
Jeff Horn was introduced into the world scene when he made a major upset of former WBO champion Manny Pacquiao to capture the WBO title before a crowd of over 51,000 at Suncorp Stadium in Brisbane but this isn’t enough to make Terence Crawford an underdog as he makes his debut in the welterweight division.
The veteran trainer with respect to Crawford’s ability, has sent an advice to his fellow countryman, telling him to attack Crawford at every point instead of sitting defensively and waiting for counter attacks.
“Jeff can’t sit back and look for opportunities because Crawford is a sharpshooter and he will pick him off,’’ Lewis told Courier Mail.

“I’m not going to say that Crawford is the best fighter in the world but he’s certainly one of them along with the Ukrainian kid (Vasyl Lomachenko). He is very fast, has good balance and he can hurt you with either hand.
“But we’ve seen some great fighters brought down a peg in recent times such as Gennady Golovkin and this is Jeff Horn’s chance to expose flaws in Crawford’s makeup.Jeff is a tremendous pressure fighter and he can whack but he has to fight like a hungry challenger from the opening bell to stop this bloke.’’
“But we don’t know what’s going to happen if Jeff lands a big punch on Crawford’s chin,’’ Lewis said. “Crawford can dish it out but we don’t know how well he can take it.
“What we do know is that Jeff is as tough as iron and he will fight until there’s absolutely nothing left in the tank.’’