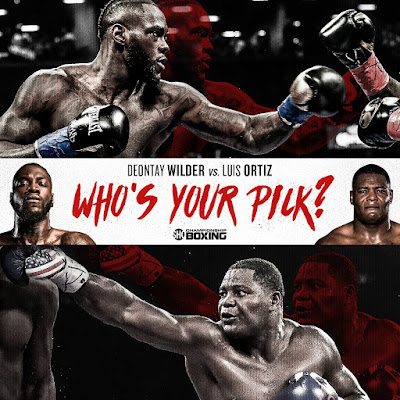 The WBC Heavyweight Champion Deontay Wilder said he is planning to make his title defense against Luis Ortiz a one sided fight and promises to severely punish Ortiz for his trash talk.
Deontay Wilder (39-0, 38 KOs) has made little trash talks from the Undefeated Cuban and mandatory challenger Luis Ortiz (28-0, 24 KOs), promising to shot him up when they get in the ring.
“Ortiz has never faced nobody with my caliber. Ortiz ain’t never faced nobody with the intensity, with the mindset that I have or with the natural killer instinct that I have. All that sh*t goes out the window when you get in the ring with a real one. I don’t care about all that. That ain’t nothing,” Wilder said.

“There is nothing that man’s going to do to touch me where he’s going to hurt me. I’m going to walk through all that. I’m telling you. That’s nothing. I’ve seen his style many, many, many times. I’ve fought it coming-up in the amateurs. I’ve got a lot of Cuban friends. I know their style. Trust me. And I can’t wait. That’s why I do my talking. I talk my talk so I can walk my walk.”
Ortiz on the other hand believes he could upset Wilder, as he sees the WBC Champion with a lot of vulnerability and dey his doesn’t only come from the Cuban but also from his trainer and team. Wilder only sees it as a better reason to inflict more punishment on his opponent on Saturday.
“Anybody else on the outside of the ring can’t talk the talk because they’re not going to be able to walk that green mile. His trainers, his promoters, his people around him are not going to be able to walk the green mile. Luis Ortiz is going to be the only person that’s going to be able to have to suffer the consequences and the more they talk, the more punishment that comes on him. Everything intensifies my anticipation of knocking his head off,”