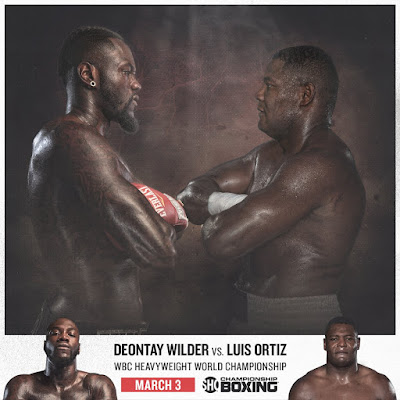 WBC Heavyweight Champion Wilder (39-0, 38 KOs) will make his mandatory defense against the hard hitting Cuban puncher Luis Ortiz (28-0, 24 KOs, 2 NC) and Eddie Hearn predicts a Wilder win in the early rounds but acknowledged the knockout capabilities of Ortiz.
The fight scheduled to take place at the March 3 at Barclays Center will be for Wilder a highway to a unification Match with IBF, IBO, WBA Heavyweight champion Anthony Joshua and according to Hearn, might have a surprise for Wilder if he gets sloppy in his moves, due to the Cubans Power counter punching ability.
“I actually think Wilder will stop him inside four or five rounds. But I think it’s a dangerous fight because people talk about Anthony Joshua having a questionable chin. Watch the Klitschko fight back and look at the shots he took in that fight. There is no way that if Klitschko hit Wilder on the chin like he hit AJ on the chin, there is no way he would still be standing. So don’t worry about AJ’s chin. Hearn said

“All these guys that can crack, like Wilder and AJ, they hit anybody on the chin – we appreciate it. If Wilder hits AJ on the chin, flush, it’s very, very dangerous. And it’s just the same way backwards. And that’s the worry of the Ortiz fight, because Ortiz can punch. He’s a very clever counter-puncher, and if Wilder wants to be sloppy in his work, he’s gonna get counter-punched by Ortiz. And if he does, he can get knocked out.”
The fight will also feature Andre Dirrell (26-2, 16 KOs), of Flint, Michigan, and Venezuela’s Jose Uzcategui (26-2, 22 KOs) fighting for the IBF interim super middleweight title in 12 rounds.