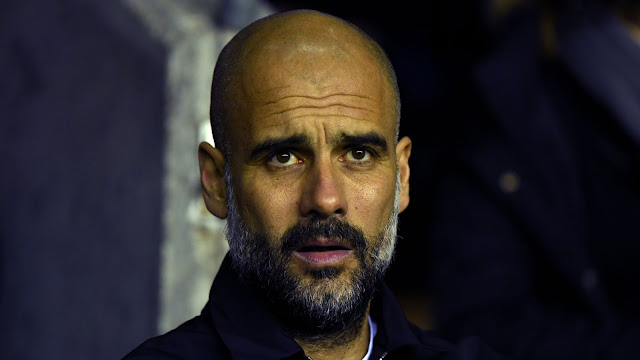 Manchester City Boss has confirmed he had contacted the Arsenal boss concerning his intentions to be in the Arsenal team during his playing days.
“I would have liked to have played for him. Pep Guardiola told Skysports.
“I called him to make an interview and he invited me to his home, he was so kind. I said my dream is to play in the Premier League and I would like to play with you and I feel I can help you. Maybe it was a little bit arrogant but he had his squad and he said there was no space.
“I understand completely but I would have liked to have played with him. It was not possible, so no problem at all.”
The Carabao Cup final is at the corner and both teams (Arsenal FC and Manchester City) have their reasons for wanting the EFL trophy as they square off at Wembley this Sunday – Arsenal will be hoping to win the trophy for the first time in 25 years while City, their first trophy under Pep Guardiola.
Concerning how important the trophy  is to him he replied
“For the club. For me of course, and for the players and the fans, but for the club, for everybody. I am not alone here, I am not playing tennis when they are alone and doing absolutely everything.
“For Manchester City it is important but after that you wake up and Thursday you have another one [in the Premier League against Arsenal]. Of course it’s a final and you have to play it like a final.”
Concerning being nervous over winning his first trophy
“Never. I am more nervous when we are in quarter-finals or semi-finals or something but normally I enjoy a final. Of course we can lose because the opponent is good, but there is also optimism we can do it.”
“In the beginning, I was more nervous because I thought it’s the end of the world if you lose the final. Then after I realised that is not going to happen, the sun still rises. But when you get old you realise that. We are so happy just being there and we are going to try to win.”
Losing To Wigan
“The hours after the game were sad, but two days later we focused on the next one. Professionals know it’s part of the game when people talk about how many titles you are going to win, to be unbeatable, those kinds of things…that is unrealistic to think about. Focus on the next one and try to win the game.