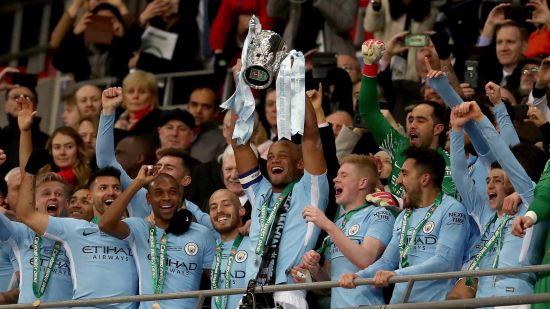 ⚽ Man of the match: Sergio Aguero

🌐 Manchester City’s 3-0 win over Arsenal is their biggest ever cup final victory, as well as the Gunners’ biggest ever loss in a cup final.

🌐 Manchester City have won the League Cup for a fifth time – only Liverpool (eight) have won it more often.

🌐 Arsenal have lost six of their eight League Cup finals, including each of their last three. The Gunners are the first side to lose in three successive appearances in the League Cup final (2007, 2011 and 2018).

🌐 City are one of four sides to lift the trophy on four successive League Cup final visits (Aston Villa, Liverpool and Manchester United).

🌐 Pep Guardiola has triumphed in seven of his previous eight major domestic and European finals, losing only to Real Madrid with Barcelona in the 2011 Copa del Rey final.

🌐 Sergio Aguero has scored in each of his last five games against Arsenal. He has scored 15 goals in 13 appearances in 2018 – more than any other player in the top five European leagues.