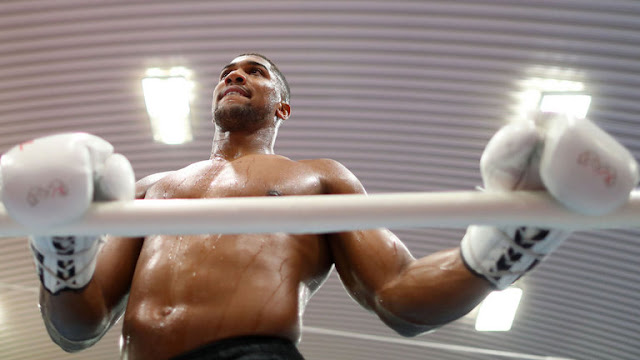 IBF, IBO, WBA Heavyweight champion Anthony Joshua is planning to add the WBO Heavyweight Title to his collection of titles as he faces off with the WBO Champion Joseph Parker on Match 31 but this time according to his promoter Eddie Hearn, he will be coming in significantly lighter than his previous two fights.
He has been gradually gaining weight and against Takem, he was significantly heavier than against Wladimir Klitschko, but from recent observations from his trainer and most recently Eddie Hearn, he will be coming in “lighter and leaner”

“I can’t see him coming in more than 17st 8lbs or 17st 9lbs, which would be half-a-stone lighter than the last fight. Maybe he will be even lighter,” Hearn told Sky Sports.
“I was laughing with him, saying: ‘you’re worse than my wife – you’re constantly on the scales checking your weight’.
“He feels amazing. I was on FaceTime with him and he got on the scales – he was 17st 7lbs on Sunday night. He’d had a weekend of replenishing.
“From the day after his Takam fight, all he has been thinking about is how he can improve, get a bit leaner, improve the jab, improve the footwork. He is obsessed with improvement.
“I watched him spar 12 rounds last week. His footwork is so much better – he is gliding on his feet, he has got faster hands. He is so meticulous in camp, like nothing I’ve ever seen.
“He is lighter and started camp earlier so they aren’t having to exhaust him. He is working hard, but much smarter. So far, this is the best camp he’s had. Coming in lighter, he feels great.”